It is safe to say that the month of August was not the one we had hoped for or expected. However, we would like to take this opportunity to say thank you for the support and patience we have received in what has been a very difficult time for the greenkeeping department. The following report will centre upon the work that has gone into and continues to go into the restoration of the golf course.

St Swithin lived up to his reputation this year.  It rained every day from 17th July to the 23rd August, including  57mm in 24 hours  (the monthly average for this area is 65mm). Not surprisingly the drainage systems were overwhelmed. This was the Promised Land: 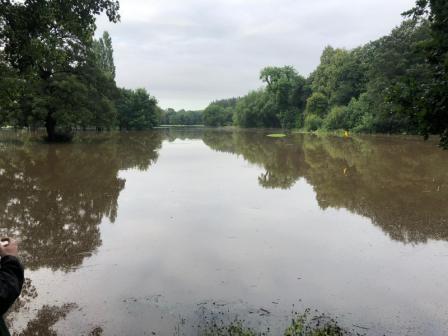 As you can see by the picture, we had quite a lot of work to do once the water on holes 5, 6, 7 and 9 finally cleared. Monday 6th August saw us slit the fairways, solid tine the greens and cut them at 8mm. We cut them at a higher height to reduce the chance of further stress because we were unable to reach those that were not under water during the flooding; the mixture of high moisture levels and warm temperatures meant that these greens grew way beyond their normal cutting height of 4mm. After this we applied a dose of feed in an attempt to fight off any disease, we used a high phosphate feed because new research has shown this is an effective way of fighting Fusarium and Anthracnose. During this period, we dropped the greens from 8mm to 6mm and then finally down to 4.5mm where they remain, we also did this for disease management reasons. In addition, all the greens have been micro tined at 9” to reduce the residual water that remained in the soil profile.[1]

To date, we have seen tremendous recovery from the greens. However, we are aware that 3, 6, and 9 are still struggling somewhat with water damage. To reduce this, we will be continuing the verti-draining and pro-coring programmes to further reduce the laying water within the soil profile. In addition, starting Monday 2nd September we will be doing our Autumn renovations. We understand that the timing of this may be somewhat frustrating given the closure of the course and some holes in the past month. Nonetheless, given the flood damage the greens have sustained the work is invaluable in the health and drainage capabilities of the greens moving forward. The work being done will be as follows;

Monday: verticut at -4 mm, cut at 4.5 mm and then spray a dose of Iron and Plant Marvel feed.

Tuesday: the tining work will begin first thing; we will be using 19 mm tines on the procore and be following with the application of 20-30 tonnes of sand throughout the course. We will then use our automatic brush to smooth the surface whilst also filling in the holes left by the 19 mm tines.

Rest of the week: will follow in the same regard until all the greens have been tined, after which the brush will be utilised every morning to limit the disruption to play as much as possible.

In the month of September we will continue to try and get the golf course back under control, as you will be aware some areas of rough have been difficult for us to keep on top of so this will be our main priority. Other projects will be as follows:

Once again, we would like to thank you for your support and patience during the last month and hope for a well-deserved and needed Indian summer.

[1] The rest of the greens were hand-cut, treated with the same feed and tined at the same depth as those above.