On a cold, wet night the Didsbury Clubhouse was transformed into a warm Sicilian landscape.  Kate Ellis, a local crime fiction author, presented her story ‘Murder in the Lemon Grove’.  Kate has been shortlisted for the Crime Writer of the Year Award, has sold over half a million of her books and the BBC has recently taken an option on a series of her books.  So Didsbury members were in good hands for a thrilling night.  A wonderful night was had by all and the evening was a massive success.

Businessman Paolo Brusconi has been found dead in a lemon grove adjoining the Villa of the Lemons, an archaeological site in Sicily.  He has been shot in the head and the local police have four suspects.

Mr Captain and three other members took on the roles of the four suspects.  They proved to be budding thespians, all of them giving passionate evidence to prove their innocence and pointing the finger at one of the other suspects.

Salvatore Lucetti, played by Mr Captain Billy Wells, is the Senora’s son – a gambler and a weak man, easily led according to the locals. He has recently taken a greater interest in the development of the archaeological site.

Francesca Pollotti, played by Nuria Corcoy, is the archaeologist in charge.  It is rumoured she had a relationship with Maria’s husband. It is her gun that has been found by the dead body.

Marco Giotto, played by Dave Richardson, is a former boyfriend of Francesca who’s made himself unpopular by acting as an unofficial guide on the site.  He is found standing over the body of Paolo and it is no secret that he is jealous of the relationship Francesca had with Paolo.

Members were given voting slips for them to choose who the murderer was.  The four suspects were lined up and the murderer was revealed with a dramatic confession by the ‘culprit’.  The solution was only given by Kate to the suspects immediately before the confession.  There then followed some fantastic and funny spontaneous acting by the culprit and his mother.  Oops!  Now you know who “dun it.”  What the audience found out on the night is WHY he did it. 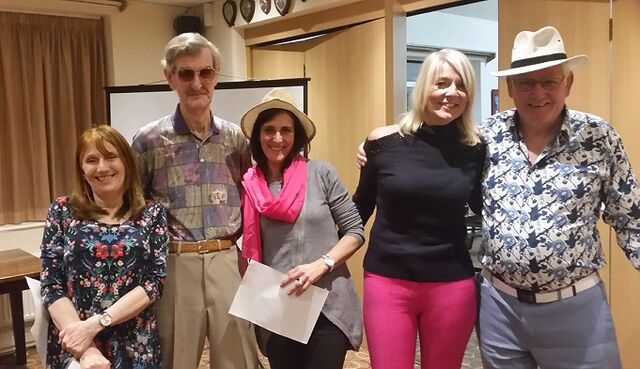